Another fantastic Central Oregon route, here we have over 80 miles of nearly unbroken sweepers and hairpins in the Ruggs – Mitchell segment of Oregon Route 207. As this route does one of those strange Oregon multi-plexing things where it forms an ‘X’ across North Central oregon with Route 19, I’ll deal with this in parts.

Landscape north of Mitchell. The road is tucked in amongst the sagebrush here and there’s some hairpins hidden like a Where’s Waldo puzzle. 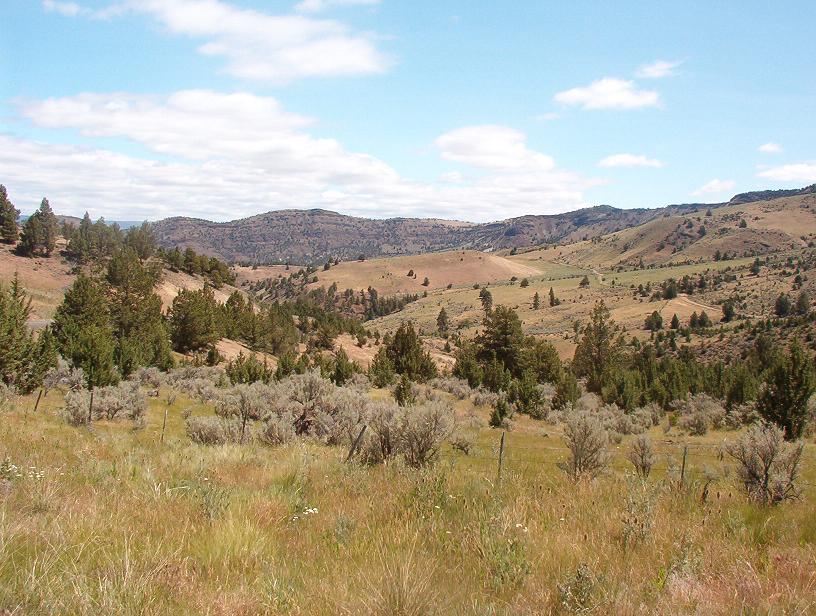 The northern end of 207 between Spray is an outstanding sport-tourer twisty road. It goes way up into the hills just a half-dozen miles north of the eastern OR19-OR207 split and it’s non-stop twisty bits until you’re almost into Ruggs. When I was up there last, they were doing some roadwork on the choicer twisties, but the road was so quiet that there I waited no more than a minute or two for a pickup-truck “pilot car” to lead me though.

This ‘pilot car’ driver knew how to hussle a truck around a road. We were tearing through the hairpins up around 4000′ at the crest and powering out of the wider sweepers. Even with the “reduced speed” due to construction zone, it was a hoot.

The middle part is the section that multi-plexes with Route 19 and consists more of intermediate sweepers. While many may poo-poo the high speed sweepers, it does give one a bit of a rest and something more important as well.

Sightlines. I know you’re thinking I’m daft now, but it’s quite important because Spray is the home of the stupidest mule deer in the Northwest. I had 4 deer encounters in 2 days in Spray. One riding into town. Twice on the way out of town. And I had one while I was merely standing next to the bike at the gas station! One of the ‘out of town’ ones even had the deer run at me after I’d come to a complete halt. Stupid things would have run right into me if I hadn’t dropped the clutch and scooted out of its way.

Strom on the Side of the Road on the Southern Section of 207: 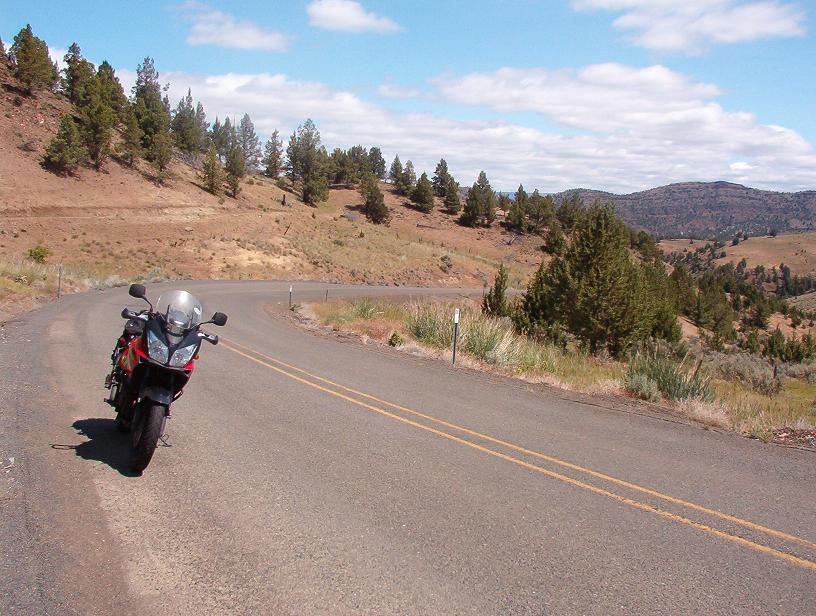 The one reason Spray’s rather important is that it’s the only gas station on this route that is open Monday through Friday during business hours. I don’t think they have Premium fuel though, but it’s called the Lazy Wolf Resort. Nice folks.

The third section is the desolate twisty bits between Service Creek and Mitchell.

There’s no civilization here and it goes right up a steep grade shortly after you make the turn onto 207. It’s all up & down and side to side on this road. My ‘Come Ride with Us’ maps (courtesy of Bill Hutchinson and the advertisers) said this road had 122 curves in that short 22 miles. I don’t doubt it for a moment though as you’re way too busy watching the road, the awesome scenery, and still keeping an eye out for the stupid deer (since you’re only a few miles away from Spray still).

There’s gas in Mitchell on some days of the week, but not on Mondays. Don’t be confused by the gas pump you see across the street from the post office. That’s supposedly been shut down for years. There’s another guy further up the main street from the highway. And there’s no Premium gas at all last I checked.

If you’ve got to have Premium or it’s a Monday, I recommend Dayville even that it’s a fair hike.

One final note after reviewing my last trip diary: The roads within the National Forest are generally not paved as well, but are more technical in nature and more challenging. I’d use these section of road to hone your cornering and curve-reading abilities and use the wider but smoother corners at lower elevations for the high-speed stuff.