This road is part of the Hells Canyon Scenic Byway. It wends its way down from Imnaha Highway near Joseph through the Hells Canyon back-country past a number of peaks in the Blue Mountains range before dropping you out east of Halfway.

Obviously, this road isn’t in one of the more populated parts of the lower 48 states. Food, fuel, and water are all important issues for travelers through this area. You can get food (Safeway!) and fuel in Enterprise and Joseph (a tourist town, watch out) and that you can at least get gas and snacks in Halfway most of the time. If you’re travelling through this area in the extreme ends of the riding season, I would recommend keeping an eye out for road closures. It’s often closed through much of its length in the winter and gets officially closed at least from Salt Creek Summit down to Oregon 86 (east of Halfway).

One item of concern with this road is that it is part of the Hells Canyon Scenic Loop. And during the peak times there’s lots of tourists driving around. I needn’t belabor how poorly the weekends tourists drive when they’re in sight-seeing mode, but if you visit during the middle of the week or early in the day you might just have the road to yourself.

I would recommend visiting Hells Canyon Overlook also, it’s got a wonderful view. Several resources have listed a number of horse camps, so be careful not only of horse trailer but equestrian near the roadway.

The road itself is in extremely poor shape throughout much of the length. There were many spots, often mid-hairpin, where the top surface of the road has literally come undone and there’s poorly-bound chipseal stones strewn across the entire lane. The top half of the roadway is a much more recent chipseal effort than the south end, but the lane lines are still just as faded as they barely perceptible ones to the south.

View up the river on the bottom half of Wallowa-Whitman Forest Service Road 39: 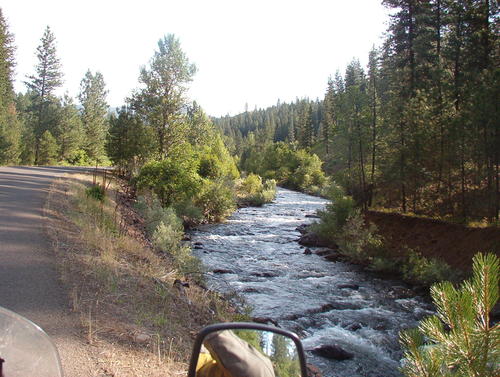 Most of the corner between Oregon Route 86 and the Salt Creek Summit @ 6000′ are in the 25-30mph range with occasional 15mph hairpins. It’s one of the better technical roads that I’ve ever done. I just wish it was a little less technical in the off-road dirt & stones sense of dealing with tires sliding from deteriorating pavement. The worst spot in the whole length during my June 2009 visit was about 18 miles up from the south where there were full-on potholes and gravel plumes right in the middle of the lane at the bottom of a decreasing radius hairpin where you’d cross through the pothole and thus into the ditch if you don’t very carefully assiduously late-apex that corner.

And also while it may not need to be mentioned since it’s one of the most common occurrences in Central & Eastern Oregon, be careful when you approach dirt-road junction that are mid-corner. There’s usually rocks from the side-road all over the pavement.

Signage one the road is rather typically National Park-thin. Most corners are unmarked and this road also follows the Oregon convention of 1 sign for each set of corners with the recommended speed on the sign set for the tightest corner. Of course, that corner is usually at the end.