For a meager $5 admission (per person) you can visit a site of lovely twisty roads and incomparable beauty (this coming from a Seattle-ite). Crater Lake is sited in Southern Oregon, not terribly far from the California State Line. Crater Lake is quite popular with West Coast motorcyclists, as shown by motorcycle license plates from every state west of the Divide in parked in the lots.

The view across the lake, from Merriam Point. 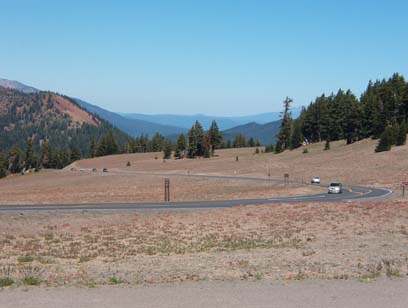 These are just the sweepers, the hairpins and twisties are even better. 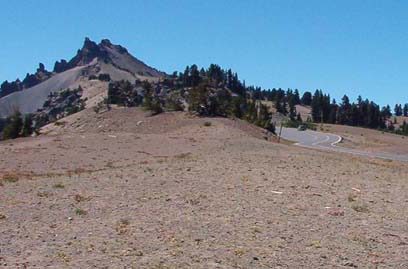 The road leading south to the Rim Village from Merriam Point.

Unfortunately, The park is also a very popular with the tourists and spirited riding should be done early in the morning before the tourists begin to trundle at 20mph through the delicious twisties and hairpins. Fortunately, Crater Lake’s narrow roads are well-supplied with turnouts and viewpoints and are surprisingly well-maintained, with painted markings for road repair to be done and sections of smooth newly-paved road where the holes grew too big or the hillside slid away. The curves within in the park are quite nicely laid-out, with relatively few decreasing radius curves and a well-painted yellow centerlines to help guide the eye through the corner and help the tourons stay out of your side of the road.

There is fuel, restrooms, and comestibles available at the Mazama Village store where our group stopped to fill-up. The fuel was unsurprisingly expensive, as all of it must be hauled up the mountain to the 6000′ level. (Note: Fuel is only available during the summer months, per Park Service pamphlet) 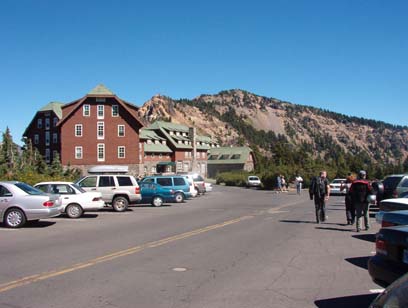 The Rim Village has a cafeteria(Llao Rock Cafe), the Watchman Restaurant, A Gift Shop, and a very nice resort lodge a few hundred yards up the road. We did not partake of the restaurant dining as it did not open until the cafeteria’s closing time of 5pm, but the evening dining area in the nearly lodge was quite swank, and the lodge allowed our gaggle of biker scum to sit outside on their deck and beverage ourselves with a round of hefeweizens.

The Lake itself at the bottom of the caldera was quite simply awe-inspiring. The lake reflected the truest, deepest blue I had ever seen. The air was so clear that details could be picked out on the opposite side of the rim 6+ miles away, even by an astigmatic such as I. On the south side of the volcano is a particular view that is rather surprising. The view extends southeastward(?) over a very large river valley and bracketed by a small mountain range.

A glimpse of it can be seen from the Crater Lake Lodge parking area, but a far better view is available a few miles counter-clockwise around the rim near what I think is Applegate Peak. The roads leading to and from St. Helens are quite straight and comparatively dead-boring. Make sure you’re alert enough after a tiring day of hairpins that you don’t ride off the side of the road in the afternoon cross-winds are endemic to the area.

A truly rewarding day trip, Crater Lake National park is well worth riding a few times around, especially once for photos and the remainder for the sheer enjoyment of the roads. 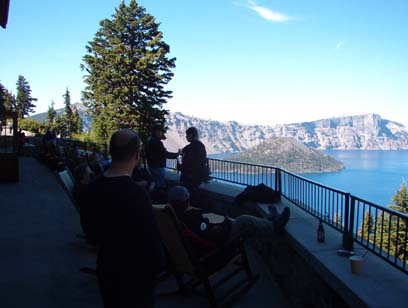 Biker scum on the deck of the lodge. 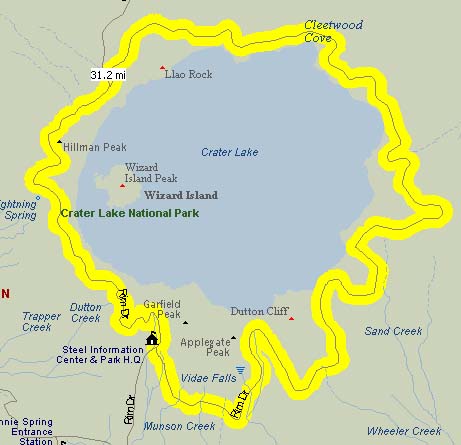 Crater Lake can be accessed by Oregon Route 62 from Medford, Ashford, and Northern California if travelling via Interstate 5. Oregon Route 138 would be the preferred route for riders accessing the park from Roseburg and the Central Oregon coastline. The northern reaches of the Interstate 5 corridor should take U.S. 97 and Oregon 58 to reach Crater Lake. Personally, I would spend a good week exploring the roads of the Oregon Cascades and ride down 97 into this area from Eastern Washington and Eastern Oregon. 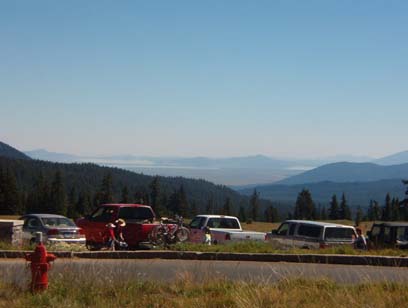 View of the Klamath Valley(?) from the Rim Village