Note: Google Maps and the other Navitech based online maps show that at least one routing of Willow Creek Road rolls right into downtown Heppner on Hager Street and the routing software really latches onto that direct route. This is not the case. From what I could see, that road has been on the bottom of the Willow Creek Reservoir for quite awhile now and the new route is on the south side of the creek and town.

If you’re coming down out of the forest there’s no real way to get lost. Just roll down the pavement and enjoy the ride.

South of Heppner on Willow Creek Road is the Willow Creek Campground. At least while I was there the RV spots were 1/3 full with rather friendly elderly folks. Where I stayed in the tent section ($6/night), the ground was pretty rocky and unpleasant. But I had the tent area to myself and nobody bothered it through several days of leaving my saddlebags in the tent while I went riding for 8 hours/day. 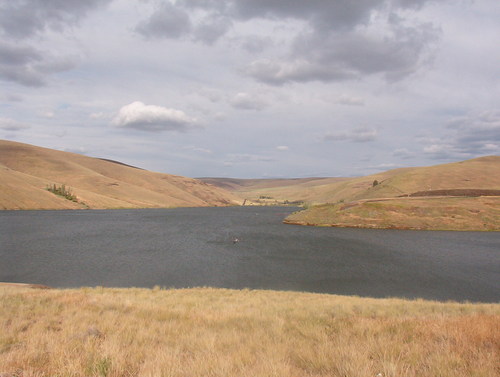 Halfway down the road not far into the serious ascent is the Cutsforth County Park. It’s a nice little campground nestled in amongst the trees. It’s a bit high up in the air for this flatlander-Seattleite to sleep in, but it look quite nice from the road.

One interesting thing to watch out for on FS 53 is the occasional cattle drive. Complete with cowboys on horses and herding dogs. It seriously thought I’d somehow dropped about 100 years into the past. The entire landscape up there looks like something out of a Western around Ukiah. Wide open mile-high pastureland with a cluster of buildings that just happen to be grouped togheter there for no apparent reason. Nice folks though, so be sure you wave.

Speaking of waving, it seems everybody waves to everybody there. The old folks in caddies wave. The farmers wave. When they’re not out raising hell it seems even the teenagers driving around wave. And just about anyone under the age of 14 waves to the motorcycles like their arm is gonna fall off. I think I might be making some more frequent vacation plans down that away.

One other thing to worry about is gas down there. While Heppner seems to have the only commercially-franchised gas station in North-Central Oregon, there’s no other fuel on the road and difficult to find in much of the region. Make sure you know when your gas stops are going to be open when you go through, and I recommend calling ahead a couple weeks before you leave to be sure that the place has fuel or is even still in business. I’ve heard that a lot of mom & pop gas stations have folded this summer due to low tourism.

Mural along the grain elevator. Reportedly the biggest mural west of the Mississippi:

View of Heppner from atop the hill by the dam: 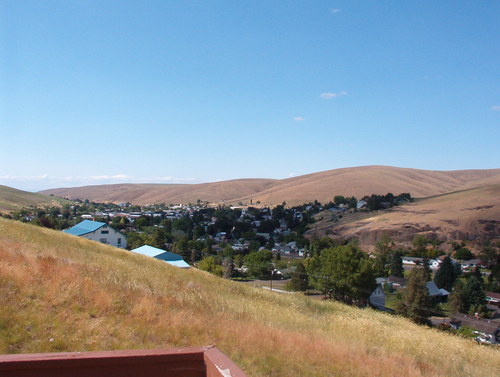 Aside from these standard concerns about riding in North-Central Oregon, it’s great down there. There’s very little traffic to worry about the pavement is quite smooth and ridiculously grippy compared to the billiard-ball smooth Seattle freeways.

If you get a chance, Ukiah has one unique characteristic shared by no other town I’ve ever heard of. The school district there is so huge and so sparsely-settled that it’s probably the only public school distract in the US that is actually a boarding school. Boys and Girls dormitories more or less on the opposite ends of town, of course.