Wikipedia has an excellent description of Oregon Route 218.

OR 218 is a fairly short rural highway. Its western terminus is in Wasco County, in the ghost town of Shaniko at U.S. Route 97. The road is very windy and hilly over its entire 43-mile (69 km) length and is a popular destination for motorcyclists. It runs through the small town of Antelope (population 50) and has a junction with OR 293 on the south end of town.

More mountainous terrain follows, and the highway crosses the John Day River into Wheeler County at Clarno. Just east of Clarno is the Clarno Unit of the John Day Fossil Beds National Monument. Between Clarno and Fossil (the largest town on the route, with a population of about 475), the road has several sharp curves, with a posted speed limit of 15 miles per hour (24 km/h) in several places. The eastern terminus is in Fossil at the junction of Washington Street and Seventh Street (OR 19).

This indeed does cover the bases. The raw facts if you will. It doesn’t even begin to cover the sheer exhilaration of roaring out of the tight corners with your knees skimming the pavement after having endured what’s most likely 50+ miles of WIDE US 97 sweepers with that obnoxious 50mph speed limit.

The views are simply astounding and the highway is just completely freaking empty.

View from the edge of the plateau looking down past the hairpins. 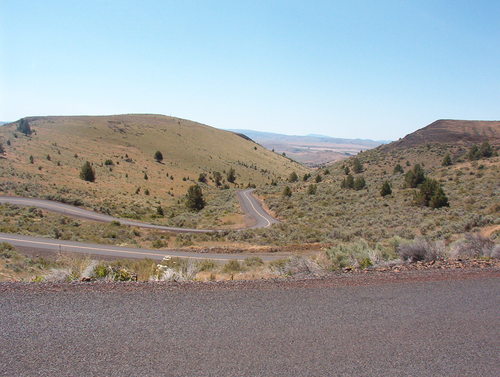 Now, I’ll freely admit that the road lulls you into a brief sense of complacency with a ho-hum straight SE out of Shaniko to the edge of the Cascade Highlands. It doesn’t last long though before it pretty much chucks you off the side of the ridge right down into a pair of 15mph hairpins and through a slot canyon into Antelope.

Running off the east side of that plateau takes you down into Antelope. If you’ve hit the day-of-the-week lottery (Wednesday through Sunday), you’ll be able to get regular fuel in Antelope. If not, you can even get a bottle of Gatorade in that town. 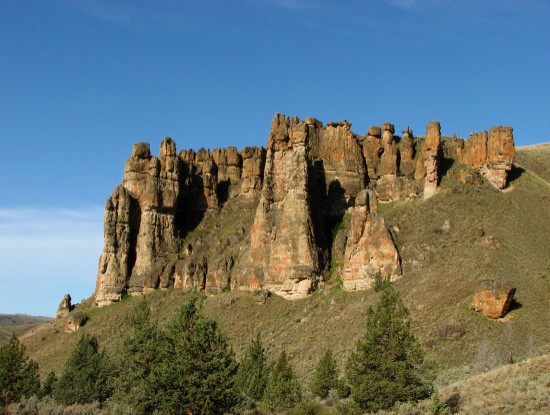 View of the Valley from the Clarno Palisades

Route 218 was also the first place where I encountered the Central Oregon habit of marking an entire set of as many as 8 curves with a single sign marked at the speed of the slowest and tightest of the bunch. More than a little harrowing when the first five corners are 45mph right angles and for #6 you are confronted with a super-tight hairpin with gravel in the apex. Going to need a clothes iron at the end of the day to get those puckers out of the seat fabric.

And while for the most part the corners do open up into regular mid-speed sweepers East of Antelope (just 1 more hairpin set East of Clarno), it’s not like it’s the end of the fun. Those curves stay entertaining all the way until you’re a just a few tenths of a mile outside of Fossil. It beats the everliving daylights out of droning down US97 after all.

One interesting oddity about this part of Oregon is the number of old stagecoach stops and farming hamlets that used to have a few homes or houses and have all been abandoned. Some of these have reported as ‘ghost towns’ by various websites, but it seems rather amusing to me to roll by old farmhouses that are specifically listed as part of a ‘ghost town’ and see satellite mini-dishes bolt onto the side of a 100-year-old supposedly abandoned hamlet.

A few other pointers:

Barn near Fossil off Route 218 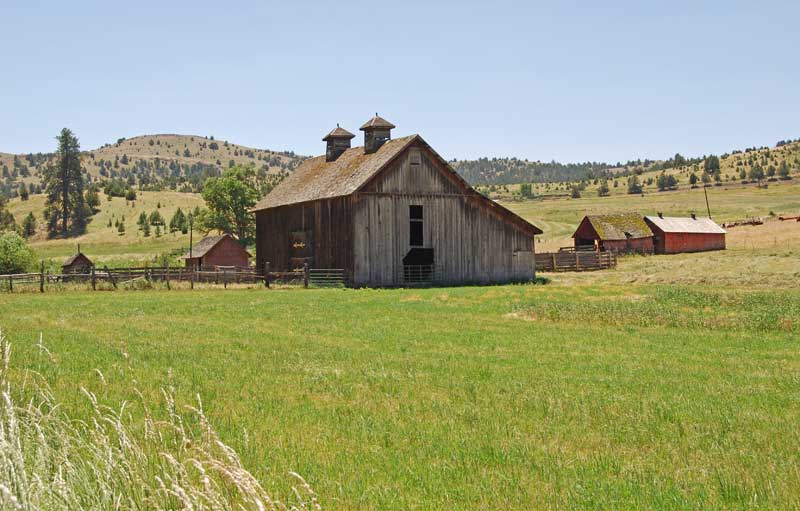 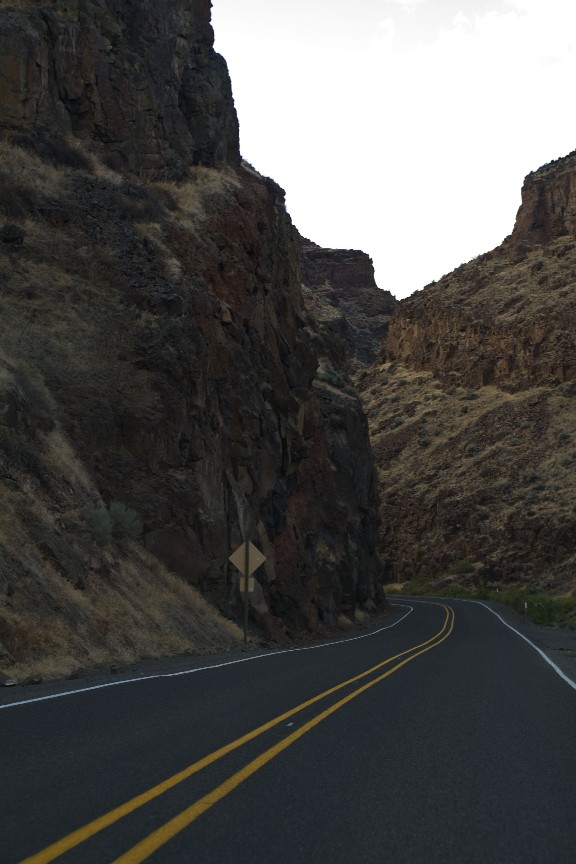