Route 82 is one of the roads coming out of the Enterprise/Joseph area. The roads begins as a somewhat dull, bucolic highway rolling through a river valley in between some pretty sizeable hills.

Mostly dead-straight sections punctuated by the occasional gentle curve, it will should be a stress to nobody’s riding skills. But once you’re west of Wallowa, the road dives into the wall of hills and you’re quite suddenly into very mountainous country running along the Wallowa River. 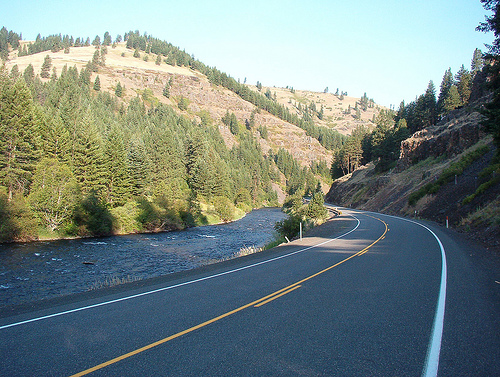 Once you leave the side of the river, the grades are quite straight and steep but what curves there are on this mountainous stretch of the highway are simply awesome. The curves are marked at 45-50 and for anything sort of a sportscar, they’re probably slower than that.

I got some serious lean angle in this stretch and I was able to completely scrub off the rear tire squaring that had been caused by the dead-dull drone down the straight section of Oregon Route 3 coming down from Bogan’s Oasis into Enterprise.

BN: This report was written in 2008, long before the fires in this area that burned Bogan’s Oasis. Last I heard however, Bogan’s Oasis had reopened in 2018 and hopefully is still selling those amazing milkshakes.