This road provides a excellent path from Ashland to Klamath Falls across the South Oregon Cascades. It’s very scenic and passes by Emigrant Reservoir ascending three 4,000+ foot mountain passes. These fantastic passes include Hayden Mountain 15 miles or so west of Keno.

There are a number of very good roads that intersect with Oregon 66 including Topsy Grade Road (which eventually turns gravel and goes to California) and Dead Indian Road that heads NorthEast out of Ashland near the western terminus of Oregon 66.

The following in-person report was written by Bandit.PDX during his November 2008 trip.

This week I’m traveling to my southern Oregon offices. So along with the daily work I’m doing for the offices the trip gives me a little scouting opportunity.

Oregon Route 66 runs about 65 miles between Ashland and Klamath Falls. In the expected scheme of things it would land at the end of the end of the first day. So the official opening day of the ride would take us across California from Eureka to I-5 on some twisty mountain roads. Then a bit of breather as we ride up I-5 towards Ashland. Then possibly this 65 mile stretch into Klamath Falls. I say possibly because there are a couple of other routes to get to KFalls if you choose to be different.

After the slab run north to Ashland, OR66 opens with 10 to 15 miles of constant turns. At this stage the road is mostly going up along the face of the hills. In spite of the photos included here most of this section does not have guard rails. In the car I was mostly able to stay between 30 and 40 MPH.

The road surface varies some but it is in good condition. There is a spot right about the 10 mile post where you come around a U curve and it looks like the roadbed slipped a bit, leaving two offset gashes in the right hand lane. The road is lined with red ‘lava stone’ gravel. Even this early in May it was quite clear. Except for some rare spots, if there’s any gravel on the road, it’s on the outer edges. The photos above and below are taken at about the 13.5 mile post, looking back and forward.

This is by far the twistiest part of the route. It goes on like this until about the 20 mile post. Then it mellows out as you decend the back side of the first range of hills.

The landscape is open oak/pine savanna like as you go up the hills. Then turns to pine forest. At least at this time of year, everything was very green and lush. With the spring we’re having, I’d be surprised if it turned brown by the time we pass through. About 30 miles in, OR66 passes through the hamlet of Lincoln, OR. This marks the spot where the road straightens out noticeably. In fact, mile post 30 marks a two mile stretch of straight rolling road. Then there’s a couple of curves as you approach and pass Jenny Creek. Then things go straight again with more sweeping curves through timbered forest.

More sharp turns come as you descend towards the Klamath River crossing. Right at the crossing the road is smooth and silky. But prior to the that pavement is more variable due to wear and tear. There’s an occasional pothole, some cracks. After crossing the Klamath County line going up to the the Parker Mtn. Pass (elev. 4356 ft.) it seemed there was more gravel encroaching on the lane. Not just along the edge, and the occasional spattering along the center lines, but also a bit more in the center of the lane.

It’s also important to remember that you may run into critters both big and small along the road. A deer stepped out into the left lane at 9:44AM. And of course there were the scurrying fuzzy-tailed rodents darting across the road.

The Klamath River crossing is quite picturesque (above) and there is an easy pull-off for a little breather. The rest of OR66 turns into a typical rural byway with a increasing density of residences as you approach KFalls. Soon you enter Keno. This is really the first village with some amenities, such as a gas station maybe a convenient store. But not a lot. So if you are cursed with a small gas tank be sure to check your fuel, and maybe refuel on the west end of the segment in Ashland before starting this segment.

As you travel onward you follow along the Klamath River and its wetlands. This region is rich in bird life. That includes a lot of waterfowl. On my trip I saw some cranes, geese, ducks. I didn’t see any pelicans on this trip, but I have in the past.

To get into the city center of Klamath Falls, you do a little cloverleaf ramp where OR66 meets up with OR140 and 97. Then go a couple of miles then exit right into the west end of town. The Quality Inn is right at the base of the ramp. That’s where I’m writing from…

With the stops for pictures, estimate the OR66 took about 1.5 hours to traverse.

The room I’m in has a jetted tub, a queen bed, a love-seat, chair, desk, small fridge and microwave. The pool is currently closed for repairs, but the front desk expects to be open by the end of the month. It’s a little ragged on the edges (peeling wallpaper in the bath) but clean and usable for a night. And it’s an easy gathering spot before heading up Rt. 97 the next day. And there’s a gas station across the street! 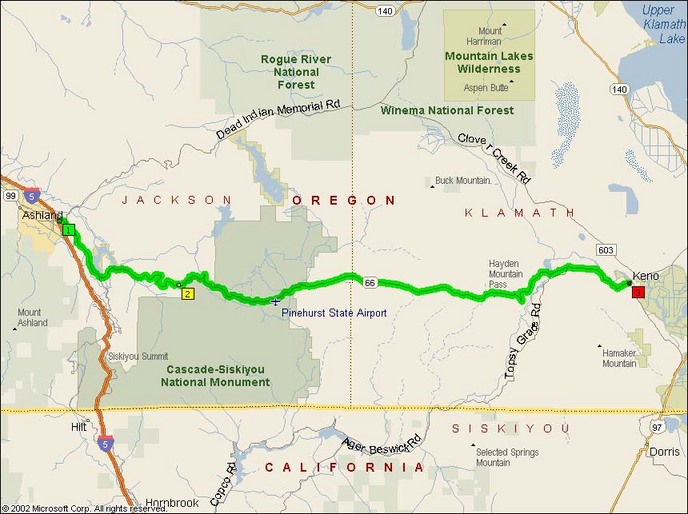