This little stretch of sweepers is quite a bit of fun and a nice way to skirt a large section of Interstate 5. While it’s 35 mile per hour speed limit causes it to be a rather leisurely way to cover this distance, it is also fairly empty and doesn’t appear to be heavily patrolled.

South Military Road route is veritably lined with evergreen trees. I estimate there is at most an eight foot buffer between the road and the forest in most sections. The buffer does help quite a bit in spotting the numerous deer that line the road. If the deer are hiding in the tree line in preparation for their kamikaze dash in front of your bike, you’re going to have very little response time before impact.

One note of caution for those looking to blast down this road at wildly extra-legal speeds, I’ve never seen any evidence of repaving in the years that I’ve been riding this road down to Portland. It looks like a very old alignment of US 99 that has been asphalted over, tar-snaked as needed, and otherwise left to slowly rot in place.

Like Jackson Highway, this road is another great means to avoid the thundering herd on 5 and take a more relaxed 4th-gear approach to traveling. This scenery isn’t spectacular and the service sparse, but your blood pressure will likely be much lower on this road. Just look out for the deer.

As you arrive east of Vader, things are a little different. Starting where Military Road crosses over Route 507, the road changes its name to Westside Highway and is still a state highway in this area. This road is maintained much better, and is far more frequently traveled. Obviously, it has less curves and wider lanes, but is still a pretty good way to avoid the lunacy that is
Interstate 5 in the late afternoon.

As you get to the terminus of SR411 at Kelso, you’ll need to head back east on SR4 to get across the river and back to I-5. If you’re heading south, you can go straight at SR4 and continue skirting around Longview and cross over the Columbia to Oregon via SR433. 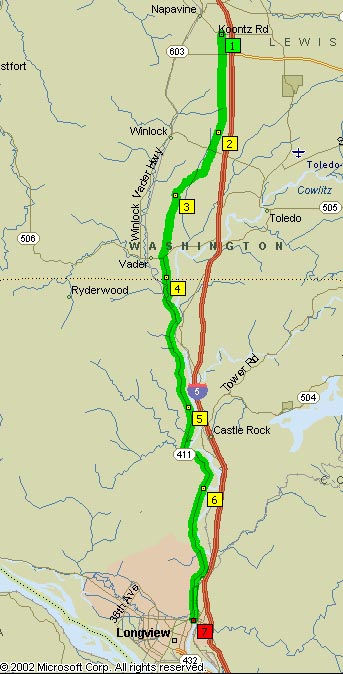