Just a little bit west of Arlington, you’ll find one of those nice roads that isn’t terribly frequented, but everybody who rides ‘knows’ about when you mention it. Burn Road is just one of those roads, as it runs north-northwest out of the Granite Falls area up into Arlington. It winds hither and yon, between farms and baby-boomer country estates, and through the occasional valley between the Cascade foothills.

Most of the curves along Burn Road are of the sharp 15-25mph style, and are essentially 90 degree corners. Be careful of opposing traffic on those slow and sharp corners, as the cagers were constantly crossing completely over into the oncoming lane. I nearly got hit head-on but a pair of dirt-bike idiots driving a early 70s Ford pick-em-up that actually got its left tires into the opposing shoulder as I was 40 feet from corner entry (and slowing rapidly by then).

On the northern corners up toward Arlington, there’s one of the most delicious set of esses that I’ve found in lowland areas. The road goes twists through a sinuous valley from just outside of Arlington to a very confusing intersection of Burn Rd and McElvoy Rd., where it appears that the piece of pavement you were on continues south and Burn Rd. turns left(east). It looks rather straightforward on a map or GPS, but it’s very different on the ground with trees surrounding you and no landmarks except for the road name placards. The curves don’t look nearly as nice on the map as they do on the ground either.

Most of the corners are fairly clean, and even in early March were fairly free of gravel. On the handful of corners that looked to be gravel-prone, the debris was limited strictly to the areas outside of the cager tires lines and once or twice down the middle. Most of these ‘problem corners’ were in the middle section. The south end corners were too banked to retain much gravel, and the northern ones were quite highway-like and didn’t have gravel edging except for inside Arlington where the road surface just plain stinks.

Also quite confusing is the act of trying to find Burn Rd. MS S&T 2003 incorrectly lists the road it branches from as Jordan Road, but should be Machias Road. From the south, you should take Machias and then take a left toward the school at the first stop sign. This turns in Burn Road once you’re out of town and thus out of the interminable 25mph speed zone.

Another nice little road lies off WA SR92, just a mile or so away west of Machias Rd. Named ‘Crooked Mile Road’ it branches off 96 for a couple miles or so and comes back in. It looks to be positively filled with curves, and is most likely the old roadbed for SR96 before it was straightened and ‘improved’. 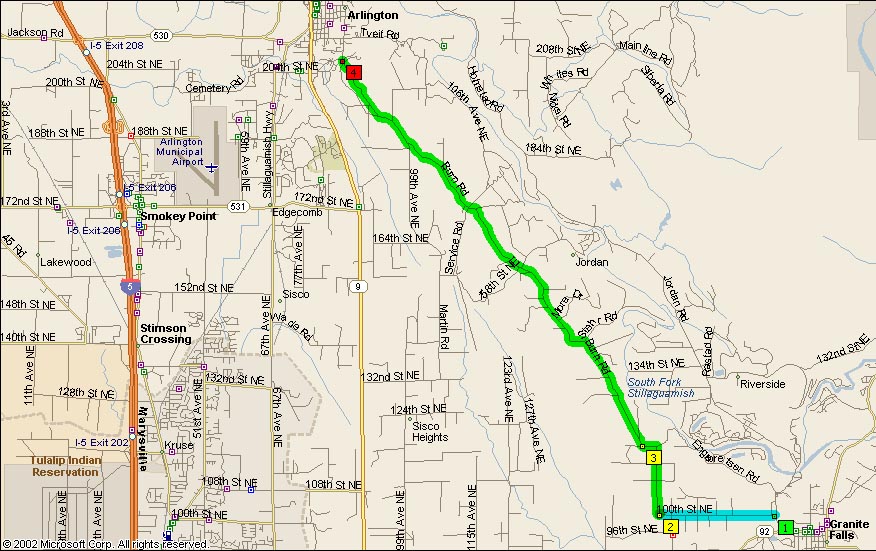