US97 is a dry side road. It wends its way up from the Columbia along the valley floors, scatterings of abandoned pastureland and hardwood pines punctuating the Eastern Cascade scenery. The views are impressive and the highway is as well-paved as it is desolate on our mid-October weekend excursion.

At one fairly flat spot south of Satus Pass, you can stop at a roadside marker where you can see four of the Cascade Range Volcanoes: Hood, St. Helens, Adams, and Rainier further in the distance. A wide vista of the valley floor, all the way up to the Cascade foothills can be enjoyed there. I highly recommend a short visit, as it’s a good spot to turn around if you want to go through the sweepers again. 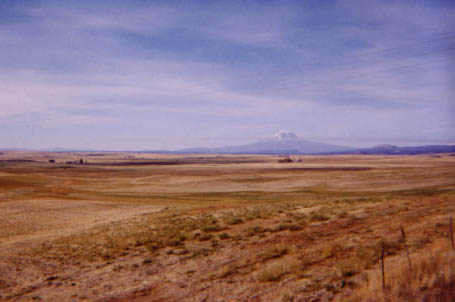 View of Mt. Adams from the Cascade Volcano Viewpoint along US97. Very pretty, and a nice place to stop on a very lonely road.

Along Satus Creek and across its namesake mountain pass, the roads curve along the walls of the canyon. The sweeper are clean and infrequently traveled, and the revenue enhancement patrols were simply not in evidence on that sleepy weekend. The few State Patrol cruisers we saw were not very interested even in our fairly elevated speed.

Between Toppenish and Satus Pass, US97 passes through the lands of the Yakama Nation. There are relatively few homesteads along the route and a number of side-roads dead-end about an eighth of a mile from 97. The posted speed of the road is quite liberal for a two-lane US route, and ascends several of the large ridges between the Yakima River and the southern Columbia.

US97 up near Satus Pass, much high-altitude greenery 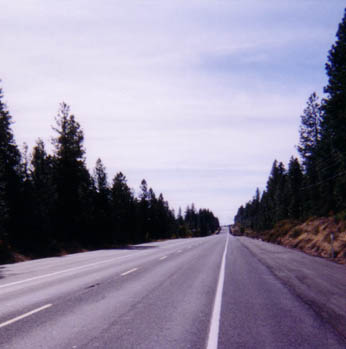 North of Toppenish, US97 is not worth mentioning as it’s an arrow-straight 1960s-era concrete freeway just like any other character-less freeway in the Midwest. North of Union Gap a few miles further, US97 multi-plexes with Interstate 82.

At Maryhill, US97 crosses the Columbia and enters from Oregon, where the average driver isn’t even trusted enough to pump his own gas. Heading west from Maryhill (and where you end up if you miss the left-hand turnoff to cross the Columbia and stay on 97 South) , is Washington SR14. A real gem of a road, and was once a US three-digit route as an alternative to US30/I-82 over on the Oregon side of the river.

This route was largely that taken by Lewis & Clark on their expedition in the very early 1800s, and is known as the Lewis & Clark Highway.

Microsoft Streets & Trips file for US 97 Maryhill to Toppenish

Overview Map of US97 from Maryhill to Toppenish 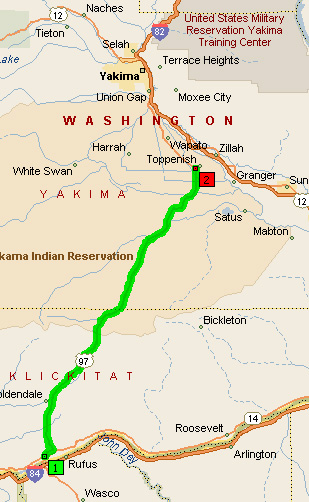